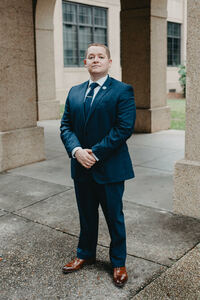 Spencer Jones is a professional musician and educator at LSU. He has a bachelors in music education, a masters of Music in Percussion performance, and is completing his final degree, Doctor of the Musical Arts, in percussion performance. While at LSU, Spencer has worked as the drumline Coordinator for The Golden Band from Tigerland. Spencer also regularly works with different high school, middle school, and community music programs throughout the country. Spencer’s swimming experience began at the age of three and continued through high school. He was apart of the state championship winning team at Alexandria Senior High School in 2012 under his former olympic coach and Louisiana swimming hall of fame member, Wally Fall. In his free time, Spencer enjoys spending time with his wife enjoying the outdoors and attending live music events. Spencer is also an expecting father.

CLICK HERE if you are interested in working at the Sports Complex. Seasonal and year round positions are available.